A Eulogy for an UN-Loved One

When German fashion designer Karl Lagerfeld died earlier this year, the news of his death received mixed reactions on social media. While not a “dedicated follower of fashion” myself (LOL!), this exchange caught my attention. He was hailed as a legend and genius by fashion critics, and no doubt that is true. But he was also decried as a “ruthless, fat-phobic misogynist” by actor Jameela Jamil, among others, and as a “fur-loving nemesis of animals” by PETA (People for the Ethical Treatment of Animals.)

While these criticisms may be justified, both Jamil and PETA were widely condemned for speaking ill of Lagerfeld so soon after his death, or indeed for speaking out at all.

After all we have been taught from childhood “not to think ill of the dead.” As Ann B. Ross once said, “I don’t believe in speaking ill of the dead, even when it’s the truth.” Our cultural attitudes to death and mourning seem to offer no room for criticising someone who has recently died. We have all sat through eulogies that made us question if we were attending the right funeral, because the “saint” that was being described did not sound like the person we had known in real life.

But is this realistic? Admittedly nobody is perfect, but that obvious fact is often ignored in obituaries, eulogies and the commentary after someone’s death. We usually carry on with the tradition of “idealizing” people who were less than ideal.

However, there are occasional exceptions, such as the obituary of the “evil” LRC posted on the Funeral Home website. His brutally frank remembrance written by his daughter, obviously holding nothing back. stated that his life was “29 years longer than expected and much longer than he deserved,”

The obituary further noted that LRC left behind two “relieved” children, a son and daughter, along with “countless other victims, including an ex-wife, family members, friends, neighbours, and doctors, nurses and random strangers.”

But there’s more! “LRC was surprisingly intelligent, however he lacked ambition and motivation to do anything more than being reckless, wasteful, squandering the family savings and fantasizing about get rich quick schemes,” the obit stated. “His hobbies included being abusive to his family, expediting trips to heaven for beloved family pets and fishing, at which he was less skilled with than the previously mentioned.”

Apparently these comments were validated by court records, which showed he had pleaded guilty to assaulting his then-wife of 40 years by pouring hot liquid on her, and by violating the resulting restraining order by threatening to kill her.

The obituary noted that no funeral service would be held, stating “LRC’s life served no obvious purpose. He did not contribute to society or serve his community. With his passing he will be missed only for what he never did; being a loving husband, father and good friend. No services will be held, there will be no prayers for eternal peace and no apologies to the family he tortured … his passing proves that evil does in fact die and hopefully marks a time of healing and safety for all.”

Ouch! Obviously not the nicest guy in the world!

But think for a minute! How many people must have secretly breathed a sigh of relief when a feared, despised or abusive relative finally died? Why is articulating this relief such a taboo?

Dr. Therese Rando in her classic book “Complicated Mourning” identifies 7 high risk factors which may predispose any individual to complicated mourning, number 5 of which is “A relationship with the deceased that was markedly angry, ambivalent or markedly dependent.”  Rando also describes “realistic recollection” in her catchy and well known concept of “The Six R Processes of Mourning.” In her third “R” she encourages the griever to “Recollect and Re-experience the deceased and the relationship which”, she states “requires realistically reviewing and remembering the deceased, as well as reviving and re-experiencing feelings.”

That, my friends, is complicated. 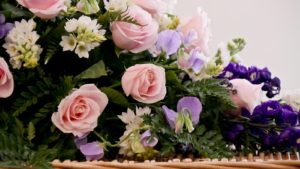