Loss of a Parent

“Now that my mother has died, I feel like a house without a foundation.” Arnold

Arnold lost his 70 year old mother to cancer, after she had struggled with the disease for over 2 years. While we had known that Renee was going to die, and was a patient in palliative care, the end came sooner than everyone expected. What complicated things for Arnold was that this sad event came only 14 months after his Dad had died in the same palliative care unit.

While many of us realize that some day we will bury our parents, somehow that inevitability seems to catch us by surprise. Some of the grief reactions can be intense and seemingly out of proportion to the situation.

It is important to note that we respond to the death of a parent like a CHILD of that parent. Some of the most commonly expressed reactions are:

Several factors help produce each of these reactions.

While it may not seem rational or logical, many of us hold to the idea that our parents will live forever. Perhaps it develops in childhood as a deeply entrenched coping mechanism. We don’t want to think of anything happening to our parents, because then “what would happen to me? How would I manage without them?” Equally we find it difficult to conceive of our parents dying from a debilitating disease, again relating to the fact that as children we see parents as strong and invulnerable. These deep rooted needs of childhood are often carried over into adulthood.

While we may no longer depend on parents for care and security, we still have that childlike inner need. In many situations, adult children are looking after parents, and providing THEM care, safety and security. But nonetheless, most of us hold on to the idea that “No-one cares like your Mum.”

In a strange way, then, an adult who loses a parent often feels like a forsaken child. We grow up as children depending on parents for safety and security. While in real life this is not always realized, we nonetheless hold on to that expectation. Thus, when a parent dies, we often feel very vulnerable to the world in general. This can be what the statement, “I feel like an orphan” is expressing.

When a parent dies, particularly the last surviving one, there is the realization that you are next in line for death. This can cause us depression, or make us acutely aware of the quantity and quality of our remaining life. While we know logically that deaths do not happen in chronological order, nonetheless when you lose that buffer, it opens up the possibility that ‘I’m next.” As one lady expressed it:

“I had the feeling that my mother’s life was going to protect me from death, but now there is nothing between me and death”

Remember, it is understanding the FEELING that helps us comprehend the statement.

The loss of a parent can often feel like the loss of the “hub”. Many times people say “She was the GLUE that held the family together.” In our early life, things revolved around our parents and possibly even the family home. Losing a parent sometimes takes away your “place to go”. The family home often represents something special … it holds the memories of the past, youth, special occasions. Home is hopefully the place where you know you are known and accepted, so the loss leaves a void in the life of each survivor.

There can also be a loss of discontinuity. My own Dad died when I was still in university. How many times I have wished that he could have seen how

the rest of my life turned out, or been there for his grandchildren, or participate in my important life events. It is not unusual for someone to think “If only my father or mother could see me now and be proud of me”, or “advise me in this situation”.

The death of a parent can bring on regrets, such as:

“My father never told me he loved me.”

“They would never discuss why they never wanted another child”

Unfinished aspects of the relationship can complicate the mourning process. It would not be unusual for people with such issues to think, “If only I had another chance, I would ask that unanswered question, or boldly initiate discussion in that forbidden area.”

Whether one would or not, is of course open to debate. How many opportunities do we let slip by? Arnold, whose mother Renee died sooner than expected, said:

“I thought she would live for a few weeks more, and that I would have time to sit down and talk about some of the things we needed to talk about. But now I will never have the chance.”

With the advances in medical technology, people are living longer these days with debilitating diseases such as Alzheimer’s and life threatening illnesses. Many children experience a role reversal inasmuch as they become the caregiver for their parents. This can include making decisions and administering financial matters, and looking after a parent’s emotional as well as physical needs. You may find yourself having to treat the parent almost like a child.

After the death, the person who assumed that role may try to remain in that position and trying to care for other family members. That person may do one of two things. They may assume the responsibility of being caregiver for

the rest of the family … in other words, assume the mantle of being a parent to the rest of the family. Or they may see themselves as most severely affected by the death because “after all, I was the one who was there for Mum in her final days” so there may some jostling among family members around who is the “most bereaved” or who is “in charge”.

Compounding the situation can be the stress of caring for someone in their final days, the physical exhaustion of hospital visits, the conflicting demands of work and your own family, as well as the decisions and preparations relating to the funeral … another good reason why funeral planning makes such good sense.

Let me suggest a few guidelines on coping with the loss of a parent.

Many think that an adult child should really just accept the death of a parent within the normal cycle of life events. When a person displays emotional devastation, we think it is not “grown up”. One lady says “I felt so silly. I was forty years old and feeling like a child.”

Several things are important in reconciling the loss of a parent. Survivors who give themselves permission to FEEL are facilitating their own grief process. When you get to the place where you want to TALK more than people want to LISTEN, that might be a good time to find a support group or counselor who will share your loss. Men in particular often feel their grief is inappropriate, or disproportionate to what is expected. They may find that expressing themselves on paper is easier than talking. Either way, the loss needs to be put into words.

It is also important to memorialize the parent. Certainly a funeral service can do that, but it is important on other occasions: lighting a memorial candle at a family get together; remembering a deceased parent (or grandparent) at a wedding, christening or other special occasion where their absence will be felt. Such occasions can help us integrate the loss into our present life while also acknowledging the significance of the contribution made to that occasion by someone in the past.

Finally, while it may sound strange, many survivors have a need to understand their parent’s presence after death. This may be connected to faith based beliefs in what happens after death, expressed in statements like, “We know Dad is in a better place with the Lord.” Other people may feel their parent’s presence in a sense that the parent is watching over them, or looking out for them. Often a sense of the parent’s invisible presence eases the survivor’s pain and gives them comfort that they are not alone.

Parents are given the task of guiding their children. The death of a parent means that now I am in control of my own life. I have taken the helm that will determine my direction and my destination. But sometimes it is good to know that we learned from someone who cared for us. So we move forward without that physical presence, but taking with us the gifts, the lessons, the values that have come from the relationship with that parent.

So maybe we are not alone as we think. 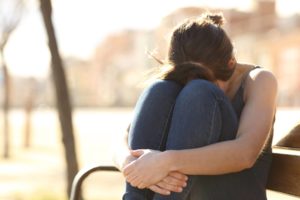