Graham was only 9 years old when his parents began to notice that he was becoming lethargic and listless. He seemed to have no energy and often refused to get out of bed or go to school. The doctor told his mother that it was probably due to a change of school, which had been necessitated by his father’s transfer by work, and so the family found a way to move back to the old neighbourhood and their extended family to see if this helped.

Sadly it didn’t, and a year later, after extensive tests, at 10 years old, Graham was diagnosed with a brain tumour. The surgery and chemotherapy that followed the diagnosis all seemed to work well and life for the family settled down again for several years. They relaxed because it seemed that all would be well.

However, following one of his yearly check-ups, Graham received devastating news that a tumour had returned, but this time so advanced that treatment could only be for pain management. Graham lived for 18 difficult months before he died at almost 17 years of age.

For his parents, as well as his younger brother and sister it was a huge shock. They had coped for years knowing that the tumour could return, but hoping for the best, especially inasmuch as he had attending school, and been a normal teenager. Life had seemed to be going on normally.

Returning to work for the parents and school for the siblings helped them through the next difficult months, along with support from their extended family. But Mum, Gloria, came to me a month ago and said “I don’t know what to do.” I asked what she meant. She said “Graham would be 18 tomorrow”.

We talked and decided that the best thing would be to cook the family’s favourite meal, invite a couple of Graham’s best friends and try to celebrate his life. Two days later I got a call to say that it had all gone quite well. All the family had been fearful of mentioning the subject. The party gave them permission to celebrate his life, to talk about the fun times, share anecdotes and stories. Graham was a kind, intelligent, handsome boy, and his was a life well worth celebrating.

While every loss is difficult, I have become convinced, personally and professionally, that the death of a child is always uniquely difficult.

The five leading causes of death among teenagers (in order) are accidents, suicide, homicide, cancer, and heart disease. Accidents (unintentional injuries) are the major cause of death for teenager accounting for almost one-half of all teenage deaths. Many teens think they are indestructible, while many parents have the urge to wrap them in cotton wool to keep them safe, and both have to often revise their expectations.

Adolescence is a time of dramatic change. The journey from child to adult can be complex and challenging. Young people often feel tremendous pressure to succeed at school, at home and in social groups. Life can become very difficult for teens and young adults. Fear of failing and anxieties about being accepted mount up. Unreasonable expectations of becoming fighter pilots, successful doctors or wealthy businessmen, actresses or fashion models are dashed very early. Reality steps in when trying to study for exams, find a job or get into university.

At the same time, they may lack the life experience that lets them know that difficult situations will not last forever. Suicide is the second leading cause of death among young people after motor vehicle accidents. Yet people are often reluctant to discuss it. This is partly due to the stigma, guilt or shame that surrounds suicide. People are often uncomfortable discussing it. Unfortunately, this tradition of silence perpetuates harmful myths and attitudes. It can also prevent people from talking openly about the pain they feel or the help they need.

Kids are not supposed to die. It seems against all the rules of nature. It isn’t fair. It should not happen. Unfortunately, it does happen and when it does, it can be traumatic. Peer relationships often seem more important to teens than family relationships. So the death of a friend may significantly affect young people in ways that parents, teachers and other adults may not understand. The death of a friend whom the parent never or seldom met may have very little effect on the parent, but it may have a huge impact on the teen. When adults dismiss the impact of their teenager’s grief it only makes it more complicated and often leaves the teen alone in his or her grief. Listen to what some teens say:

“My parents act like the death of my boyfriend shouldn’t matter. They don’t understand what he meant to me. We really loved each other. We could talk about anything and everything. Maybe if my parents had taken the time to get to know him, it would be different. They didn’t want us together. I guess they’ll never understand.”

“They treated me like a stupid kid. I could tell they weren’t telling me everything. They said it was an accident. I knew it was bigger. Why couldn’t they say, ‘it was suicide,’ and tell me the truth?”

When my friend died, the rest of the world kept going and no one knew what I was going through. No one could understand the pain I was feeling. I wanted the world to stop and I wanted to just scream out,’Doesn’t anyone realize that I am hurt?’ I kept looking at people and thinking, ‘You don’t have a care, and look at me, one of my friends just died.”

After a peer dies, teens are confronted with the realities of death and the possibilities of their own mortality. Young people often think that they are immune to death. They think that death only happens to old people. When a friend or peer dies, their entire world and beliefs are shaken to the core.

Since teen relationships are often up and down or on and off, grief for a friend can be even more complicated. Grief can pull people together or apart. Some teens following the death of a friend come together and share their grief while other teens grieve alone or have difficulty sharing their emotions around their loss. Most teen friendship revolves around fun times and shared activities. Grief is not fun and is hard work. Sometimes the grief after the death of a friend is even harder as old friendships start to break apart; so on top of the death is the loss of other friends and the good times.

Trust is important to teen relationships. It is important that teens learn the truth about the death of their friend, how, when and where a peer died. Secrets, lies and half-truths, although meant to protect, only create anger and confusion. Teens deserve to know the truth. Teens want their questions answered with the complete truth. If adults don’t have the facts yet, then “I don’t know” is the truth.

When young friends die, sometimes it may be an anticipated death, due to a long term illness, but more often the death is sudden and violent. Sometimes a friend’s death through suicide may be a teens’ first introduction to death. These bereavements are very difficult to accept and leave teens wondering ‘why’ for a long, long time. Just because the friend is not an immediate family member doesn’t mean that it isn’t taken as a great personal loss.

Many times, a funeral or memorial can be a helpful way for teens to come together. Many teens find that it helps them to attend as they will receive support from others who are grieving, they will be able to say goodbye to their friend and it helps them to know it is “real” and that their friend is really dead. It may help to see the family and friends and share stories.

What helps after the death of a teen friend?

Each year thousands of teenagers feel the overwhelming loss of someone who in one way or another helped shape their developing self-identities. How many of us can remember that schoolmate who died in their youth. When that happens, the feelings about the death and how they are handled by parents, teachers and peers are remembered and become a part of their lives forever. 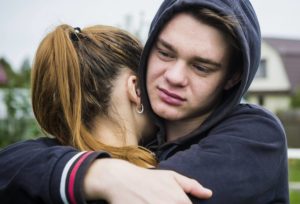