The Importance of Social Support

It was a tough job, but somebody had to do it!

I recently led a group of 25 people, each of whom had experienced bereavement in the last few years, on a “therapeutic journey”.

We all went on a Caribbean cruise!

Trust me; no-one had to twist my arm! We enjoyed good food, warm sunshine, saw interesting places and enjoyed friendship and support. But equally importantly, each afternoon we met for 45 minutes and I facilitated a support group on the ship. We talked about feelings and what we missed about the person who had died, of course. But many issues had to do with helping participants reinterpret life as it now is and encouraging them to find ways to make the most of what they have left.

Some may ask what organizing such an excursion has to do with grief support. It is actually one part of a programme we call Among Friends. While, as you would expect, I advocate the importance of psychological and emotional support for people after a loss, I have become increasingly convinced that social support is a crucial element in their recovery, or as I prefer to call it, their reorganization of life after a loss.

Over 20 years ago, people would attend my 6 week grief support programmes, and at the conclusion say, “Now What?”  I noticed that they experienced a secondary loss when the group ended, missing the regular interaction with people in similar situations. So we began to organize monthly dinners at a local restaurant. Anywhere from 30 – 80 people would show up and enjoy a nice meal, and even more the opportunity to talk and share Among Friends. As the concept developed, we organized day bus trips, social evenings, corn roasts, to the place where today we offer movie groups, dinner groups, theatre groups and a host of other activities in which people participate.

It isn’t long before people don’t come to Dr Bill’s grief therapy groups anymore, because they are so involved in the social support and activities of Among Friends. And that suits Dr Bill very well because he is busy dealing with the more recently bereaved, as well as taking huge satisfaction in seeing those whose loss is not as recent “move on”.

I came back from this year’s cruise with a renewed sense of excitement and enthusiasm for the model of social support we have developed. Social support means having friends and other people, including family, to turn to in times of need or crisis in order to gain a broader focus and positive self-image. It is knowing that we are part of a community of people who love and care for us, and value and think well of us.

Grief support must involve at least 3 levels of support; informational, emotional, and social.

As we all know, shortly after the funeral, people tend to withdraw from the bereaved, not knowing what to say, and dreading doing the wrong thing and “making it worse”. In fairness, it is also true to say that many grieving people pull back from other people when experiencing grief and sadness, wanting people to feel we are “handling it, being strong or coping well.

For these reasons, reconnecting with others in healthy, supportive ways is often an important component of managing many mental health issues or grief. We all need people we can depend on during both the good times and the bad.

According to Immanuel Kant, the German philosopher, three things are necessary for happiness: a) something to do, b) someone to love, and c) something to look forward to.

I refer to this as “situational reinterpretation.” It reflects the principle which I recently tweeted (@drbillwebster) that states, “what the caterpillar thought was the end of the world, became the butterfly.”

When someone dies, the grieving person often feels like their world has ended. When we have helped them to understand grief, work through their emotions and confront the reality of how life is different, the journey does not end. They still have to come to terms with how life can be meaningful even in the light of loss, known as situational reorganization. Knowing that life still has meaning gives us a purpose, and gets us out of bed each morning. 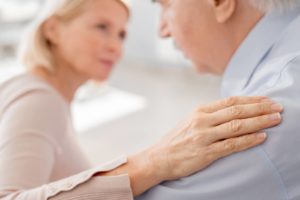