When someone dies, or is suffering a life-threatening illness, we are often concerned about how children will cope. Here are a few suggestions on understanding and helping children after a loss.

Children have many questions about death, and these are usually different than the ones adults have. Children’s questions deserve simple, straight forward answers. The first task of a grieving child is to make sense of the factual information about how the loss occurred. A caregiver’s simple, direct, concrete explanation of the facts surrounding the death will help the children begin to come to terms with what has happened. They may ask to hear the facts a number of times. They may also want to share the story with many others … friends, teachers, strangers … in order to try to comprehend this unimaginable thing that has happened.

Children’s perception of loss and their grief has to be understood according to their developmental levels. Death, or indeed any loss, means different things to children of different ages. Enquire and try to figure out what this loss mean to this child at this particular time in life. What they feel they have lost will be an indicator of what they are missing.

Address any fears the child may have. Children are often afraid that someone else in the family, or they themselves could die also. Every child is afraid of being abandoned, so if one parent has died, the remaining parent needs to give the child reassurance that he/she expects to live a long time, and that the child will be OK, allaying their fears.

Every child’s response to loss is unique. As children share their grief with others they trust, they will tell us what they are feeling and experiencing rather than we adults us assuming we know what the child is going through. By showing respect, acceptance, warmth and understanding, the child senses that they are being taken seriously and will be more open to sharing what they need by way of support.

Children express themselves in many different ways after a loss. Some of these may include: an apparent lack of feelings or emotion; acting out behaviors due to feelings of insecurity and abandonment; behaviors that invite punishment, for children would rather be punished than be ignored; regressive behaviors; fear; guilt and self-blame; doing better or worse at school; feelings of loneliness.

Children like to “do” something in such situations. Devising simple ceremonies such as lighting a candle next to a photograph; placing a letter, picture or special memento in a casket; releasing a helium balloon with a message attached for the person who died; or placing a special flower on the grave, can be effective goodbye rituals. Children themselves can be wonderfully creative with meaningful, symbolic ideas, so let them decide what they would like to do.

Speak in simple language: Ask the child what he/she thinks, knows and feels, and respond specifically to these concerns. Try not to give excessive or gruesome detail, and make sure you check how the child is putting the information all together.

Be honest. Avoid half-truths. Never tell a child something he/she will later have to unlearn. Don’t avoid the word death, because sometimes the alternatives (asleep, gone away, in a better place, etc.) create worse difficulty in a child’s mind.

Be open about the situation: When my wife died, my boys were 9 and 7 years of age. As much as I might have wanted to, there was no avoiding the questions that arose. “Why did Mommy die?” “Where is she now?” “What will we do if you die too?” I tried to answer the questions they asked simply and honestly, without giving too complicated responses. They discerned that I was making them a part of it all, and was being open about everything, and accepted that.

Initiate the conversation: Children may not ask questions because they are not sure if they will upset us adults. They may not know what to ask, or be able to put their uncertainties into words. They know that something unusual is happening, and are scared by it. Instead of asking questions, they may turn to whining or other negative behaviors, which add to your emotional stress. In response, rather than helping them cope, adults may get upset or angry and this adds to the reluctance to talk. Try to be sensitive to opportunities to ask children how they feel. We might ask, “You’ve probably been wondering about ….”, and pose the question that the children may be asking.

Sometimes our concern for the children can mask a deep need to resolve our own adult grief issues. Sometimes it is easier and more socially acceptable to say, “I am concerned about the children,” than it is to say, “I’m having a hard time dealing with this myself.” So be careful not to transfer your own fears and anxieties on to the children.

Often a child may benefit from a support program. Talk to your doctor, spiritual leader or other community resource people to see what programs are available for your children.

Remember that children are wonderfully resilient, and with support and understanding, caring adults can help guide children through this difficult time and make it a valuable part of personal growth and development.

There is no greater gift we can give our children.

When someone dies, or is suffering a life-threatening illness, we are often concerned about how children will cope. Here are a few suggestions on understanding and helping children after a loss.

Remember that children are wonderfully resilient, and with support and understanding, caring adults can help guide children through this difficult time and make it a valuable part of personal growth and development.

There is no greater gift we can give our children. 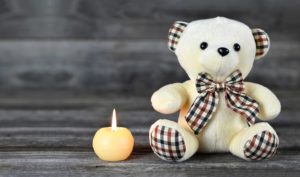