Living with Your Decisions

It has all added insult to injury for Teresa.

Her husband was diagnosed with an aggressive form of cancer just last summer. The disease progressed quickly and Rick died in late December, leaving Teresa and their two teenagers facing a multitude of issues.

During the months of his illness, Rick and Teresa discussed at length many practical issues about what she should do after his death, including selling his business, the children’s future, and her own financial situation.

One of the major concerns was what to do with the family cottage which had been in Rick’s family for 3 generations, and facing an uncertain financial future, they decided at the time that it would be better to place the property on the market for sale. Being in a prime location, an offer to purchase came quickly, “conditional” on the purchaser selling their own home after necessary renovations. Rick and Teresa signed an agreement just a month before he died.

But now, several months after Rick’s death, the sale on the verge of finally closing, Teresa has had second thoughts about the transaction, not helped by the fact that one teenager wants to keep the cottage that holds so many memories of childhood, while the other wants nothing more to do with it.

She has called the lawyer and discovered that really it is out of his hands, and the sale can only be cancelled if the buyer is willing to withdraw from the contract. She has even called the buyer, and pleaded with him to “let her off the hook” even offering to pay for the renovations that were done. She has talked to everyone seeking “advice” when in fact there is no advice available except, at this point, “what will be, will be.”

It’s a mess! And worst of all, 100% of Teresa’s attention and emotional energy is being focussed on the sale of the cottage, which in fact is not the real issue on her heart, (although of course she is not able see that right now!)

The old principle of “Don’t make major decisions for at least a year” is still relevant, even though in this situation, it feels like closing the barn door after the horse has bolted. Much of Teresa’s decision-making power is used up ruminating on things that she doesn’t have the answer to, and which quite honestly is, at this point, out of her control.

And maybe that is exactly what makes it so difficult.

We can feel for good people who find themselves feeling they have to rush into making decisions while still frozen in a state of shock, barely able to believe (much less able to make any sense out of) what has happened to them. Being emotionally raw and vulnerable is never the best frame of mind to be making major decisions such as selling property or the like. But do these decisions have to be made or can they be delayed?

This may sound harsh, but in one sense, perhaps Rick should not have been the one making this decision. After all, now that he is gone, it is the survivors who have to LIVE with the decision. Opinions, recommendations and feelings are beneficial, and it is usually helpful to know the dying person’s wishes.

But the wisdom of today is always transformed by the uncertainty and reality of tomorrow.

Perhaps it is better in these situations better to make decisions, or suggestions that are reversible. No-one knows what they are going to do or want, or even how they will feel until they actually find themselves IN the situation. Difficulty making decisions is one of the primary “avoidance strategies” and second guessing ourselves is based on the loss of confidence in ourselves that bereavement can generate.

One widower stated:  “I felt the urge to act on things right away and sadly, some of my decisions turned out wrong later on down the road. Bad decisions can be made when emotions cloud your judgment, and grief is the most intense emotion I have ever experienced.”

My concern as a counsellor is that Teresa is expending all her emotional energy on something that can’t be changed now. In her mind, is it easier to try to change something that COULD be changed, and that she feels is still within her power (she could buy her way out of the contract, or appeal to the buyers compassion for the bereaved); than to face something that she realizes is beyond her power, namely to have her husband and her old life back.

In a nutshell, people usually question their decisions because they don’t really know what they want in the first place. So when all is said and done, the issue really is not about the cottage. Teresa really wants the one thing she cannot have, namely her husband back.

We will continue to support her as she struggles to come to terms with that reality. 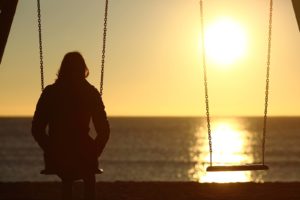