A good belly laugh may have repercussions all the way up to the heart, (which for people with a belly like mine is good news.)

We had an interesting support group the other week which was, shall we say, different. It is probably not going to go in my “Guide to Good Grief Groups” book as an ideal model of what should happen, but somehow it did happen, and somehow it worked.

Diane is what might be called “a character”. She never stops talking, which is always difficult in any support group. Even worse the stuff she talks about is completely “off the wall”, yet the only person who does not realize that fact is, you’ve guessed it, Diane. She’s a nice enough person, but I constantly have to ask her to allow others to talk, not to interrupt and to keep to the point.

Last month, with 30 others in attendance, Diane started in. She attends the group because her father, whom she cared for devotedly for many years, died last year. She began to talk about other losses in her life and told us she had been engaged 5 times, but all her fiancées had broken off with her. (None of us asked the obvious question owing to what we felt was the obvious answer!)

Anyway, her description of these relationships was hilarious, and Diane, sensing that she had the crowd, went on and on providing more and more detail. At the end of every description of failed relationship, she said “But at least I kept the ring” and then showed us that particular ring. We soon discerned that she was wearing all 5 rings on different fingers, like trophies.

Well, someone started to laugh and giggle, and the more reaction she got the more Diane rose to the occasion. It really was funny. I bit my lip really hard, but eventually we were all literally in hysterics. It was a hoot. Finally, we called a break to get things calmed down and back to my grief agenda, but people wouldn’t let it go. In spite of the concerted intervention of that world renowned expert, Doctor Bill, people continued to tell funny stories about their loved ones, and by the end of the evening our sides were aching from the laughter. We used a lot of Kleenex that evening, but the tears were different.

What was even more interesting, as one lady left the meeting, she said, “That was great. I haven’t laughed this much since before my husband got sick.” And several others have told me that they felt lifted for several days after.

I am not suggesting this as an innovative model of grief support, but I found myself asking “What happened here?” Maybe it was just the mood we were all in. Or maybe it was something more significant.

It is well known that laughter has healing qualities. The research of Norman Cousins in “The Anatomy of an Illness” began the connection between the endorphins created by laughter acting as an anesthetic to pain, physical and emotional. Recent research has been more specific. For the first time, researchers have found that laughter causes the endothelium, otherwise known as the inner lining of blood vessels, to dilate. This increases blood flow which, of course, is good for overall cardiovascular health.

The message is clear, and fairly economical. “I think it would be reasonable for everybody to loosen up, and spend about 15 to 20 minutes a day laughing,” lead researcher Dr. Michael Miller, director of preventive cardiology at the University of Maryland Medical Center said in a recent article.

Which leads to the proposition that television may actually have a limited role in heart health “if you watch the right shows and spend your time watching comedies rather than stress-provokers,” Miller cautioned.

Although this is the first study to show that laughter has such an effect, Miller had previously reported that people with heart disease generally respond to everyday life events with less humor than people who were healthy. And Harvard University researchers have reported that people with an optimistic outlook also have a reduced risk of heart disease.

For this study, Dr Miller randomly assigned 20 healthy volunteers to watch either 15 to 30 minutes of a light movie such as Kingpin, Something About Mary or excerpts from comedy shows; or, on the heavier side, the Steven Spielberg war drama Saving Private Ryan. The participants were divided equally between men and women, averaged 33 years of age, and had had their initial blood flow measured after an overnight fast.

Almost all of the volunteers (95 percent) experienced increased blood flow while watching the funny movie, while three quarters (74 percent) had decreased flow while observing the ravages of war onscreen.

The magnitude of the changes was similar to the benefit that might be seen with aerobic activity, Miller said. That’s not a reason to trade laughing for exercise, he added; the ideal would be to do both.

It’s not clear why laughter had this salubrious effect, but Miller has some ideas. “The endothelium has endorphin receptors so what may be happening after a good laugh is these endorphins are released and activate the receptors, causing an interaction or perhaps just an independent dilation of the endothelium,” he said. Endorphins are “feel good” chemicals with morphine-like properties.

Whatever the reason, the message is clear. Doctors need to spend more time talking to patients about stress and the psychosocial aspects of illness.

I am not advocating that humour should cover up grief, or that laughter should replace tears. It is important to grieve the loss of a loved one. Unresolved grief causes even greater problems down the road.

What I am saying is that laughter and tears are both valid in the dying process and in the grief after the loss of a loved one. Our attitude towards death is often one of strict seriousness. As George Bernard Shaw once said, “Life does not cease to be funny when people die any more than it ceases to be serious when people laugh.” A sense of humour can help you overlook the unattractive, tolerate the unpleasant, cope with the unexpected, and smile through the unbearable.

As Roger Rabbit puts it: ‘Sometimes a laugh is the only weapon we have.” 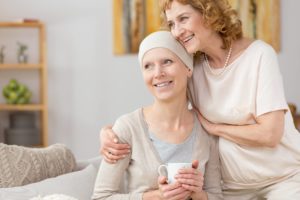