Loss from a Childs Perspective

“My mother died when I was 5 years old. I felt like I was insignificant, as if I was getting smaller and smaller … so unimportant that I might disappear. It’s very hard to explain, but I believed I was wrong, somehow. For years I felt like I was on the outside of things, even though others would not have thought I was.”

Sally’s words teach us that a child’s feelings resulting from the death of a parent or sibling may not be obvious to others. Because the child thinks the universe revolves around them, a death can produce an anxiety that translates into a “fear of losing myself.” Sally, at 5, felt like she was getting “smaller and smaller” and that she might “disappear”. This fear of being lost, and the related anxieties about being on the outside of things is common among children of all ages.

It should be obvious that any child old enough to love is old enough to grieve. Children of all ages are affected by any significant loss, and often very deeply, because their coping mechanisms are just developing. To understand the complexity of how each situation affects a child, we should ask ourselves:

“What does THIS loss mean to THIS child, at THIS time in his/her life?”

However it is important to recognize that a child’s comprehension and their response to a death vary, depending on their age and developmental levels. Death means different things to children of different ages.

For Infants, awareness of their world is limited, so the death of a mother is perceived as “unavailability” or “absence”. An infant’s needs are for physical contact, warmth and consistency, all of which creates security. The absence of a nurturer poses a threat to survival, resulting in fears.

Between about 2 – 4 years, a child still has no concept of the permanence of death, but their fears are more numerous. Cartoons suggest that characters can be blown up, run over, hurt, but then simply get up and go about their business. Likewise the young child may believe that “Mum will come back” and may continue to act as if the dead person is still alive. Death is just a “sleep” from which they didn’t wake up.

Between ages 5-9, a child’s understanding of death undergoes another change. This is often the age of “magical thinking”. They see death as coming from an external source … a bogeyman, or angel who comes to take people away. They regard it as some kind of enemy or assailant. Thus children may regard death as something to outwit, rationalizing “if I am good or do the right things I will be able to reverse this.” If we do not make children a part of what is happening, or keep it “a secret”, they assume that somehow they are responsible, which mistaken perception merely adds complications to their mourning.

Again remembering that we are talking developmental levels as well as actual ages, between 9 – 12 the child begins to understand that death is the end of life, irreversible, and is a natural part of life rather than an enemy who steals people away. They become more concerned with the consequences of death … “who will take care of me? will we have to move? will Dad marry again? (and if so what will happen to us?)” Because they are no longer thinking of themselves as “little children”, they may present a façade of independence and coping. They want to comfort a surviving parent or family member, and may try to assume the roles of the person who has died. They want to be helpful, which can be OK, but caution is required. All too often younger children have a terrible burden placed on them by some well-intentioned person who says, “You need to act grown up. You’re the father/mother of the family now.” The child will assume the role to attempt to master their pain and deny their helplessness, but it is unrealistic to expect a child to be anything other than a child.

Older children often need help to express their grief, especially over the loss of a parent. Research clearly shows that teenagers have more intense grief, but struggle desperately not to show it. Adolescents are suspended between the dependency of childhood and the adult responsibility they hope to earn. The young person may fear that expressing deep sadness or grief displays a return to childhood vulnerability, which they resist stoically. But also, it is part of the teenage role to be in conflict with parents, and so when a parent dies during this transition between reliance and self-determination, there can be a struggle. Besides, it is not regarded as “cool” to be talking about missing your parents. Teenagers are exceedingly concerned about the acceptability of their responses to others, particularly their peers. Thus the teen may find it difficult to express the feelings the death of a parent can raise.

Any death confronts teenagers with their own mortality. They could die. Angry at the death, they may adopt a “Why should I care” attitude. Perhaps as a defense, or maybe in defiance, young people sometimes engage in reckless or dangerous behaviors to show they don’t care or to try to prove they are immortal.

As we have mentioned, a child who has been personally affected by death will have multiple fears, among which might be:

One teenager says: “I was afraid to talk about how I felt to my mother because I knew she would start crying. Then my older brother would get mad at me for upsetting mom. So I kept my feelings to myself, and pretty soon I was afraid to say anything to anyone.”

Special care is necessary when talking to children about death:

Children do not stop grieving until they have gone through ALL their developmental levels. At each stage, there is new learning about the old experience. The child may grieve until they become young adults, because it is not until we are sure that we can survive the experience that we are able to integrate the fact of our loss into our changing lives. 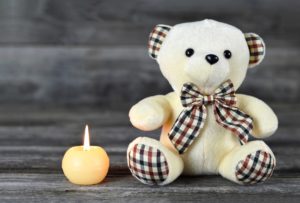