When death occurs from sudden, unexpected circumstances, such as accidents, suicide or murder, reactions are more severe, exaggerated and complicated. The mourner’s capacity to use their adaptive coping mechanisms is overwhelmed. This is not to say that this loss is more DIFFICULT, it is just that the factors that impinge on the grieving person as a result of sudden violent deaths lead to more complicated bereavement.

Some of the factors that can affect a survivor of homicide are as follows:

Inasmuch as there is no preparation for news of a murder or suicide (or indeed any sudden or unexpected death) there is no preparation for the emotional onslaught such news brings. It is difficult to believe that MY loved one could be gone so swiftly, and in such a violent and degrading manner at the hands of another human being. The death does not make any sense and our minds cannot absorb the reality far less the meaning. Such situations demand more information than the mind can store, so questions about the events and circumstances will be asked repeatedly, over and over, in an attempt to try to find both understanding and confirmation, not that the news is TRUE but that it is “not true.”

Nothing in our psychological makeup or coping mechanisms prepares us for this kind of psychological trauma. There will be a constant rehearsal and repetition of events; what happened, when, how, where, who did what … and the unanswerable “why.” No answers to these issues are good enough because the mind is seeking to understand something that is incomprehensible.

Such cognitive dissonance may last for months or even years. It may be triggered or revived by court proceedings, every time there is an appeal or a parole hearing, and even when and if the perpetrator is released from jail, lasting for years.

It is difficult for someone who has never been in the situation to understand the intensity, duration and frequency of the anger and rage that such a situation generates in survivors. What is dangerous in such situations is that these emotions are often on a continuum from anger to rage, from rage to violence. While anger can be a healthy emotion, obviously acting out our rage in violent behaviour must be prevented.

After a homicide, the normal anger of grief is compounded by the rage and desire to destroy the life of the person who destroyed a loved one’s life. Research shows that often survivors imagine ways of making the murderer suffer more horrendously than they made a loved one suffer. Such feelings often then engender a sense of shame, “that I could think such a thing,” and can be frightening. “Am I no better than this animal who killed my loved one? If I know myself to be a good person, how can I think such thoughts? If I can contemplate such savagery to this person, am I safe around my own family?” Such thoughts can lead to withdrawal and deep depression.

Survivors should be helped to understand that such thinking can actually help them re-frame both the scenario and the reaction. Once again the issue is the survivor’s feelings of helplessness and powerlessness. The circumstances of the murder cannot be changed, but what CAN be accomplished? How can the survivor be empowered? By helping them to see what they CAN change, they re-establish a sense of control over life.

Often survivors of homicide will have fears and apprehensions, feeling vulnerable to further psychological and physical assaults. Their world is no longer as safe as previously believed. This can affect their lives by restricting many activities. Chronic phobia can lead to total dysfunction.

Murder violates our belief that we have a right to life and directly opposes the high value we place on life. Most people strive to maintain life at all costs. Murder is a direct violation of that principle. Once a person starts to question their belief system in one area, all other areas come under scrutiny as the survivor searches to find understanding of the circumstances and meaning of life in general. This can lead to our next category.

Guilt is rooted in our feelings of helplessness and powerlessness. When someone dies we confront the reality that something has happened that we may not like or have wanted. We all like to think we are able to control our own destiny and that if we work hard enough, believe and have positive attitudes, everything will work out. So, when confronted by any challenge, we try to determine, “What can I do?” Sometimes, in spite of our best efforts, there is nothing we can do to change the inevitable. Facing the fact that something has happened that there is nothing we can do to change is the most difficult challenge of all.

And then the question for many becomes, “What do I do when there’s nothing I can do?” While that may seem contradictory, it is a very real issue.

Many times over the years, I have heard people tell their story of a positive and enjoyable relationship they shared with someone they cared about. But after a death or a crisis, they will say, “I feel so guilty.”

My first instinct is to respond, “You mustn’t feel like that. You’ve nothing to feel guilty about.” But the reality is that for whatever reason, they do feel guilty.

I have come to realize that there is a big difference between being guilty and feeling guilty. Many people feel at fault even though there may not be much evidence to suggest that they are to blame.

Let me say it again. Most of us would rather feel guilty than feel helpless.

More often, however, the cause and effect is not identifiable, yet many try to rationalize in an attempt to make it so:

“If only I had made them wait five more minutes, they would not have been on the road when that truck went out of control.”

“If we had not had that argument, my husband would not have died of the heart attack.”

The problem is that sometimes arguments cause heart attacks and sometimes heart attacks cause arguments. Guilt becomes a means to self punish in an attempt to atone, and in some way acknowledge how this could have been avoided.

Sometimes guilt is connected to the fact that someone else is gone and we are still here. Many people fantasize about saving the deceased person or of taking their place. “I would do anything to save my sister,” one fellow said. “I’d be ready to give up my own life if she could survive. Why her and not me? She has so much more to live for.”

Survivor guilt seeks to punish by reminding us that we are well and will live on. If not dealt with effectively it can cripple one’s efforts to reconcile their loss and rebuild their own life.

Venting your feelings and fears, whether with a friend or with a professional, can help relieve some of the pain and anxiety. Being able to talk through some of these issues can help us see that perhaps bad things happen in spite of, rather than because of, our efforts. Seeing that death, and much of life itself, may actually be outside our direct control can free us to let go of the things that are unchangeable. There are many things in my world that I cannot control and the older I get, the more I realize how long that list really is.

The homicide survivor will be impacted not only by the death, but by the presence of other outside systems, which may include police, the criminal justice system and the media. What makes it more traumatic is that the survivor may have little knowledge or familiarity of how these “work.” Each of these systems may intrude into personal matters at a time of great emotional turmoil. Some survivors talk of “secondary victimization” by such intrusions, which may be even more difficult to deal with, inasmuch as it is seen as an invasion by outsiders infringing on privacy with what seems to be little respect for the rights of the individual. This results in systemic loss.

While grief is a normal reaction to the loss of a loved one, the mourning process after a homicide is affected by systems and events outside the control of survivors. Such situations can cause the survivor to withdraw in order to make sense of the tragedy. A support group needs to help build bridges back to the living.

Forgiveness is the key to dealing with guilt, blame and anger. More often than not with grieving people, it has to do with finding a way to forgive ourselves. A great deal of the guilt, anger and blame is because we cannot fix the situation. “I wish there was more I could do” is the sentiment, leaving us feeling guilty that we were not able to do enough to change things.

But some will say, “How could I ever forgive that monster who took my loved one’s life?” We need to understand that we should forgive, not for this other person’s sake, but for our own. Hatred and other emotions keep us connected to that person. They symbolize the fact that this person and their behaviour still has control over our life. They have done much damage to our life already. Do we want them to ruin the REST of our life with hatred and negativity? Forgiveness will do nothing for them, but it will do a great deal in helping give us back our life. Talk to a counsellor or spiritual advisor about this vitally important ideal.

People need to forgive themselves for being human. Part of our humanity is our inability to change or fix all situations and circumstances. Tragedies happen, and as much as we might like to prevent them, or have them happen to us rather than our loved ones, we have no control over these things. Some things in life are beyond human control. Work to help people accept that this is part of our human limitation. Goodness knows that we would do anything to change this, but nothing will be sufficient. 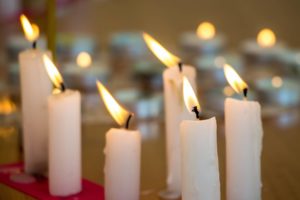